Auroville is an experimental international township in South India (in Tamil Nadu, near Pondicherry) where thousands of residents from over 60 countries are exploring alternative ways of living, working and being together peacefully.

Auroville was created in 1968 by representatives from 140 countries and all the states of India. It is the largest and oldest surviving international intentional community in the world. In 54 years, Auroville has flourished from a barren desert to a 3,000-acre township and bioregion in which more than 3 million trees have been planted, home to rich biodiversity, 9 schools, multiple social enterprises, etc.

Auroville is based on the dream of Mirra Alfassa, known as the Mother, to put in practice the teachings of Sri Aurobindo, one of India’s most prominent philosophers and leaders of its independence movement. The intentions behind the project are listed in a Charter.

Auroville has been recognised by global authorities such as the United Nations (UNESCO passed multiple resolutions supporting it) and eminent personalities such as the Dalai Lama and was supported by the late J.R. Tata.

But if you would ask this question inside Auroville, everyone will tell you their own version of Auroville’s essence. Perhaps in this diversity lies the answer? What is this place that can mean so much to such a diverse range of people that they leave behind their land, their stable jobs and security, and jump into a social experiment held together by a shared Dream and a Charter?

What are the goals of the Auroville project?

Auroville is working to come up with models and systems that enable humans to rise above today’s imperfect and unsustainable ways of being and living together that lead to inequality and exploitation: Nations fighting and claiming land and planetary resources as their own causing suffering and misery worldwide; Consumerism and the search for pleasure and material enjoyment for the egoistical satisfaction of desires and passions; Education has become a rigid institution to obtain certificates and posts leading to titles and positions; Material wealth and social standing propel a constant quest for the supremacy of power and money; Human relationships are based almost exclusively on competition and conflict; Art and culture is not accessible to all and depends upon one’s social or financial position.

In view of all this, the Auroville Charter calls for a “living embodiment of a true human unity”. This implies both individual and collective transformation are needed to realise harmony in society. Within the Auroville project are dozens of initiatives focusing on topics ranging from reforestation to circular economy, to universal basic income and participatory governance. The Dream speaks of a place “somewhere upon Earth” where old systems no longer limit human creativity and social innovation. So Auroville is experimenting on behalf of all mankind.

How to get there? is a question that has occupied generations of Aurovilians. The Charter calls for “taking advantage of all discoveries from without and from within” and it refers to “material and spiritual research” and “unending education”. Broadly speaking, one could say Auroville is a living laboratory, where learning and inquiry is invited and catalysed.

How many people
live in Auroville?

Today, the population is around 5,000 – including around 3,000 residents (around 50% of which are Indian nationals), their partners, “newcomers” (people wanting to become Aurovilian), and long-term volunteers. Additionally, Auroville counts about 10,000 day visitors and 5,000 employees from neighbouring villages per diem.

Is this enough to build the kind of systems and models humanity needs? Yes and no. For example, there are enough consumer households to create a different model for distribution of basic goods, to run a viable e-mobility service and a library, but maybe not enough for a health insurance scheme. In many ways, Auroville works well in covering its residents’ needs in various domains such as education, art and culture, food and housing, etc. However, in other ways, it can already be considered too big (see Summary of crisis for more details about the current trouble Auroville faces in terms of decision-making).

Why is Auroville “unique”?

Firstly, this project exists because of a unique founder and integral philosophy. The Mother and Sri Aurobindo were clear about the need for spirituality to be put in action, not removed from society in a dedicated space of worship, to transform and improve humankind and society through an evolution of consciousness.

Secondly, the community that has come together around this call to action created a culture of its own, quite separate from either the backgrounds of the early participants or the local Tamil traditions, and yet integrating both. In Auroville, there are as many languages spoken as countries represented, traditions from all over the world are shared in various gatherings, and the residents celebrate the creation and existence of this community every year during the “Auroville Birthday Week” (between the founder’s birthday and Auroville’s inauguration date).

When people first moved to Auroville, there was no shade, so they planted trees. This led to greenwork and sustainability becoming the backbone of collective life – in stark contrast to other cities around the world. Since then, tens of thousands people have attended workshops in Auroville, focusing on sustainability as well as the legacy of experimentation and teaching – both as Auroville for a space to try things out, but also to share knowledge with the world.

While Auroville still remains in the process of developing, the level of goodwill and generosity shown in 54 years has been impressive: there are over 150 units creating everything from lampshades to treehouses, people built their own roads and infrastructure, created 12 different schools, 2 health clinics, an ambulance service, a solar powered kitchen that provides 1,000 meals a day, countless buildings using sustainable building methods, 2 amphitheatres hosting more than 2,000 people, and the list goes on and on… To discover more about Auroville’s achievements, please click here.

Last but not least, the Indian government plays an important role. The Auroville Foundation Act (1988) is the first time a government adopted an official act of parliament, inviting an international community that “belongs to nobody in particular” within its borders. All citizens of the world can ask for a special Auroville visa to participate in this project. No other country has dared to follow this example.

Is Auroville a religious sect?

To become an Aurovilian (an official resident of Auroville) one declares that one has no religion. Instead one is expected to be “a willing servitor of the Divine Consciousness” – which is a force larger than our human self. How to practise this service is up to each individual and there are no prescribed rituals, ceremonies, or priests.

When the Mother wrote “The Dream,” she decided that creating a new kind of society had to be done without the potential dogmatic values of an established ashram. Sri Aurobindo emphasised an integral approach to life, combining physical, emotional, intellectual, and spiritual realms, and he saw a special role for India as a spiritual leader of the world.

The famous Auroville Foundation Act as well as a Supreme Court ruling confirmed once and for all the independent and non-religious status of Auroville. So Auroville can be said to have a spiritual mission, but not a religious one.

I have never heard of Auroville before, why?

Advertising this project is something that the Mother, the founder of Auroville, overtly discouraged. Some people in Auroville say that they came here because they are “called” to do so, they were attracted by an inner call. Moving to a township where many aspects of social life are still unfinished, and everything you do can be questioned by anyone, is not an easy choice. As Auroville had limited capacity to welcome newcomers, it stayed very discreet in the media.

This situation changed 10 years ago, when Auroville started opening up to the world. With all the projects and results originating in Auroville, it was not really possible anymore to avoid public visibility. The emergence of social media also dramatically increased attention. Now, with the world facing a global ecological crisis and the shadows of capitalism being exposed, it is to be expected that a project aiming at finding alternatives to the dominant systems for over 50 years will come more into the limelight, such as studies and other initiatives conducted to create support systems within communities.

What are the fields of expertise of Auroville ?

Auroville has been a hotspot of green work and social innovation since the 1970s. Auroville has played an important role in sectors covering education, agriculture, reforestation, energy, waste management, architecture, design, and community building.

As a laboratory of evolution, warmly hosted by one of the most spiritual countries of the world, Auroville has already proven its desire to progress in numerous fields. What is already here has been built up from scratch, and possibilities abound. What is very important for most residents is not the destination, but the journey. 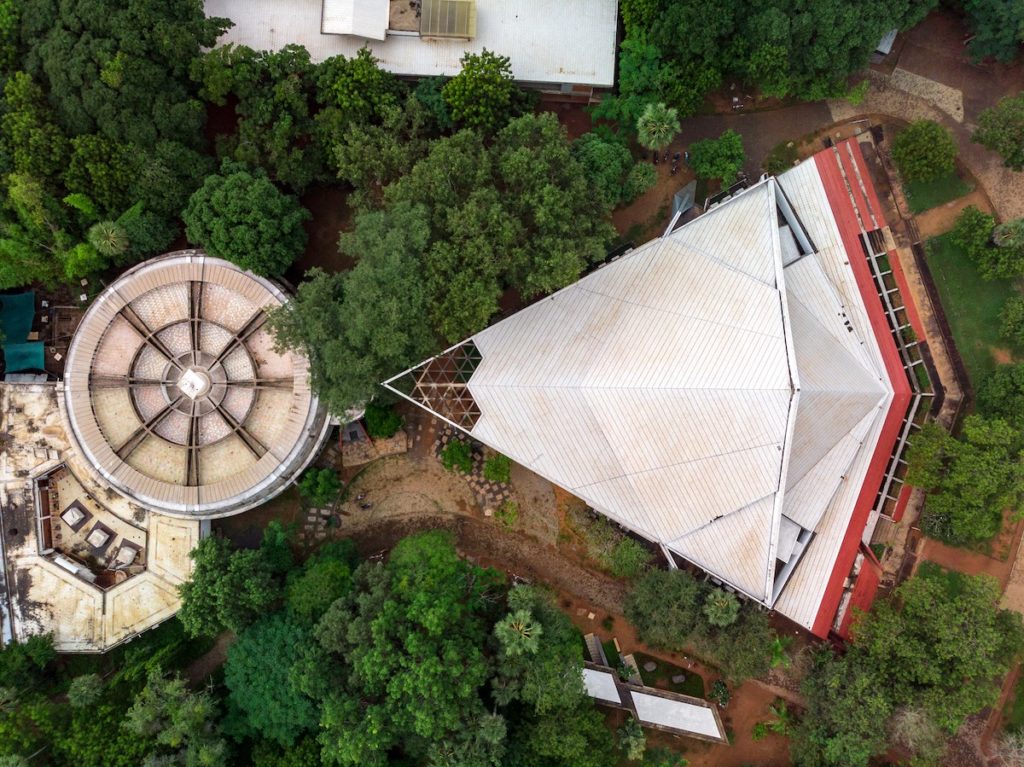 There should be somewhere on earth a place which no nation could claim as its own, where all human beings of goodwill who have a sincere aspiration could live freely as citizens of the world and obey one single authority, that of the supreme Truth; a place of peace, concord and harmony where all the fighting instincts of man would be used exclusively to conquer the causes of his sufferings and miseries, to surmount his weaknesses and ignorance, to triumph over his limitations and incapacities; a place where the needs of the spirit and the concern for progress would take precedence over the satisfaction of desires and passions, the search for pleasure and material enjoyment.

In this place, children would be able to grow and develop integrally without losing contact with their souls; education would be given not for passing examinations or obtaining certificates and posts but to enrich existing faculties and bring forth new ones. In this place, titles and positions would be replaced by opportunities to serve and organise; the bodily needs of each one would be equally provided for, and intellectual, moral and spiritual superiority would be expressed in the general organisation not by an increase in the pleasures and powers of life but by increased duties and responsibilities.

Beauty in all its artistic forms, painting, sculpture, music, literature, would be equally accessible to all; the ability to share in the joy it brings would be limited only by the capacities of each one and not by social or financial position.

For in this ideal place money would no longer be the sovereign lord; individual worth would have a far greater importance than that of material wealth and social standing. There, work would not be a way to earn one’s living but a way to express oneself and to develop one’s capacities and possibilities while being of service to the community as a whole, which, for its own part, would provide for each individual’s subsistence and sphere of action.

In short, it would be a place where human relationships, which are normally based almost exclusively on competition and strife, would be replaced by relationships of emulation in doing well, of collaboration and real brotherhood.

The earth is certainly not ready to realize such an ideal, for mankind does not yet possess the necessary knowledge to understand and accept it nor the indispensable conscious force to execute it. That is why I call it a dream. Yet, this dream is on the way of becoming a reality. That is exactly what we are doing on a small scale, in proportion to our modest means. The achievement is indeed far from being perfect, it is progressive; little by little we advance towards our goal, which, we hope, one day we shall be able to hold before the world as a practical and effective means of coming out of the present chaos in order to be born into a more true, more harmonious new life.

Want to receive our newsletter?